UPDATE: On site volunteering for groups of up to 10 people is now open on a limited basis. Contact volunteer@habitatncc.org for more information.

Together, we deliver homes, community & hope in New Castle County.

"The more goals accomplished, the brighter the future will be"

Nema and her teenage daughter have lived in an apartment riddled with maintenance issues ranging from pest infestations to poor water pressure which have taken a backseat to the looming fear of being “put out” for voicing grievances pertaining to these conditions.  Frustrated with these issues, Nema began looking towards Habitat NCC when a close friend was approved for our homeownership program.  Filled with shock and joy upon hearing the news that she was later accepted into the program, Nema described her future home as a place where her and her daughter “can finally relax and be comfortable”.

Help us continue to build homes, communities, and hope!

"It's not just for me but also for my nephews (my godchildren). I don't ever want them to feel like they have to go through what I went through".

Lucinda is no stranger to the Eastside of Wilmington and her journey as a Habitat homeowner will bring her and her nephews back to her childhood neighborhood.  Family has always been an important constant in Lucinda’s life especially her relationship with her grandmother.  However, despite that importance, they were not always a close proximity when Lucinda physically needed them.  Prior to applying to Habitat, Lucinda found normalcy in sleeping in her car until she found a small apartment for her and her sister’s family.  As the small apartment seemed to grow smaller, Lucinda was encouraged to apply for Habitat alongside one of her best friends.  The news of being accepted into the homeownership program came on a bittersweet day in December 2019.  Lucinda was beyond excited that her dream of homeownership was about to come true, however the first person she would want to share the news with recently passed away.  Her motivation throughout her journey towards homeownership has been both her grandmother’s support and wanting to create a more stable life for her nephews than what she experienced growing up.  On September 30, 2021, Lucinda received the keys to the stable forever home that she would share with her nephews.

What is Giving Tuesday?

Giving Tuesday was first created in 2012 as a way for people to use social media to encourage their network to pay it forward.  It has since become a global movement that inspires hundreds of millions of people to give, collaborate, and celebrate generosity.

How can you help?

This year for Giving Tuesday, we have the chance to take to social media and come together in building homes, community, and hope.

learn and share about the cost of home campaign 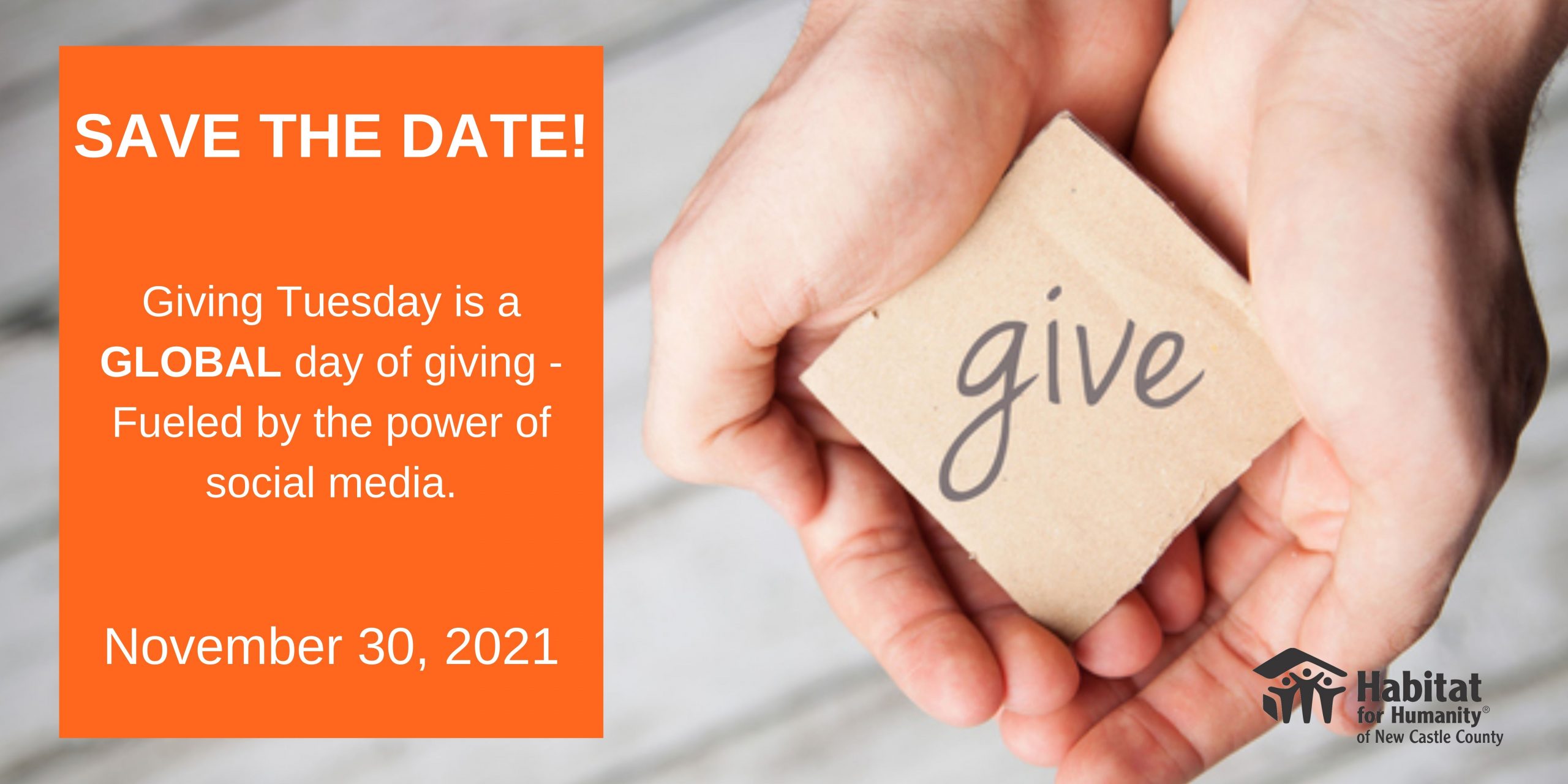 Getting involved is easy!

Create a Facebook fundraiser to
encourage your friends
to support Habitat’s mission.

Make an online gift to our
#GivingTuesday campaign and
build homes, communities
& hope!

Are you a donor, volunteer, homeowner,
or affordable housing advocate?

Download our social media graphic &
tell the world why YOU support Habitat!