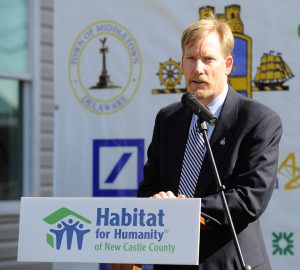 For 26 years, Kevin L. Smith has served as CEO …seeking to build homes, community and hope with hardworking families in New Castle County.

The first paid staff member hired by the New Castle County affiliate of Habitat for Humanity, he began his career with Habitat as a volunteer coordinator at Habitat for Humanity in Fresno, California. He made his way out West – and to Habitat – through a Volunteer Program that is part of the Mennonite Church.

A Newark native and UD “Blue Hen,” Kevin previously worked in the systems field for Delaware companies such as AIG Marketing, Standard Chlorine and Synerfac. He holds a B.S. from the University of Delaware in Business Management (Operations) and a minor in Management Information Systems. Kevin completed Habitat for Humanity’s Leadership Certificate from Harvard Business School in 2010 and Bank of America’s Neighborhood Builders Leadership Training in 2016.

Kevin is a bi-vocational minister, as he has recently been commissioned in the United Methodist Church as a deacon (clergy- Reverend). Rev. Smith graduated in May 2022 with a Master of Arts in Ministry and Leadership from Lancaster Theological Seminary in Lancaster, PA. He will continue to serve Habitat for Humanity as his primary vocation and will add a secondary vocation as clergy for his church, Newark United Methodist Church.

Kevin and his wife Diane have been married 23 years and are blessed with four daughters and two grandchildren.